Here’s a list of small species of birds with the most brilliant and brightest coloration.

All body parts of the birds on the list are extremely colorful. The bill, the feet, the head, the wings, the belly and all other parts are indeed brightly-colored. 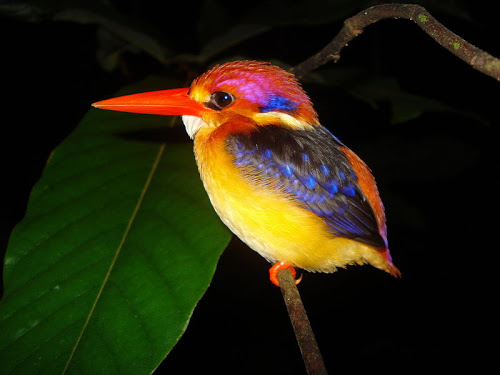 The Oriental Dwarf Kingfisher (Ceyx erithaca) is a surefire winner in terms of brightness of coloration. This small red and yellow kingfisher with yellow underparts and bluish upper parts inhabits lowland forests of South Asia and Southeast Asia. It is also commonly known as the Black-backed Kingfisher.

The magnificent-looking Regal Sunbird (Nectarinia regia) is a very colorful small bird species of the Nectariniidae family. It can be found in the African countries of Congo, Burundi, and few other neighboring countries.

Kingfisher birds are well-known worldwide for their brilliant colorations. One of the most brightly-colored kingfishers is the Rufous-collared Kingfisher (Actenoides concretus). This beautiful and lovely-looking bird inhabits tropical and subtropical forest of Southeast Asian countries. This bird is threatened by loss of habitat.

Without a doubt, the Gouldian Finch (Erythrura gouldiae) is truly one of the most beautifully colored small birds in the world. This colorful passerine bird is native to Australia. Thousands of Gouldian Finches are being kept as pets. This pretty bird is also scientifically named Chloebia gouldiae or also commonly known as the Lady Gouldian Finch. It is widely bred in captivity, but classified as endangered in the wild with a remaining population of about 2,500 birds.

The male and female species are both brightly colored with black, green, yellow, and red markings. To determine a male from female, it should be noted that female’s chest is a lighter mauve while the male’s chest is purple. A Gouldian Finch’s head may be yellow, red or black. Other common names of this very beautiful bird are Gould’s Finch and Rainbow Finch.

This brilliantly-colored bird that belongs to the genus Laniarius is a carnivorous bird species commonly known as Boubous or Gonolek. Yellow-crowned Gonolek (Laniarius barbarus)can be found in Africa inhabiting scrub or open woodland.

The Regent Bowerbird (Sericulus chrysocephalus) is a small but colorful bird species with a golden orange-yellow crown, mantle and black-tipped wing feathers. The bill and iris of Regent Bower is yellow. It is endemic to Australia and feeds on insects, fruits and berries.

Parrots are known for their bright coloration and their ability to mimic human voice. One of the most brightly-colored parrots is the Red Lory (Eos bornea). It is stunningly attractive for its very bright red coloration, hence the name. It is native to Moluccas and surrounding islands. This intelligent and playful bird is commonly kept as pet.

The Orange-Bellied Leafbird (Chloropsis hardwickii) is a small but colorful bird endemic to Himalayas, China and Malay Peninsula. This brightly-colored bird with an orange belly, a green back, a blue tail and flight feathers, and a black and blue patch over its throat and chest feeds on insects, spiders and nectar.

The Black-naped Oriole (Oriolus chinensis) is a pretty bird of South Asia. This passerine bird species feeds on fruits and insects. This colorful bird species is resident in the Nicobar and Andaman Islands.

The elegant-looking Masked Trogon (Trogon personatus) of South America is a colorful bird species that inhabits humid highland forests. Males are usually brighter in color than females. In addition, females of all subspecies have a partial white eye-ring.

16 thoughts on “10 Most Extremely Colorful Small Birds for Pet”