Parrots are probably the most popular bird pets that usually bring joy and cheer to its owner. But how much do you know about this beautiful and colorful bird. Read on to find out.

Parrots are a very popular group of birds. Their colorful plumage, cute antics and their ability to mimic human speech endear them to us all. No wonder parrots are such favorite pets. Some of its species include: Macaws, Conures, Cockatoos and Cockatiel, Short-tailed Parakeets, Lories and Lorikeets, Amazons and Senegal. Below are some exceptional and surprising facts about parrots. Learn and enjoy.

Do you know what parrot species are called the “Seven-color parrot”? The honor goes to the parrot species inhabiting the rainforests of southern Venezuela and northern Brazil — The Caique (see above photo). This parrot gets its “seven-color” nickname from the distinctive color of its plumage that includes: yellow, green, black, blue, orange and white.

There are two separate types of African Greys. The Congo Grey is the most common group and the larger one, but do you know the other type? It is the Timneh Greys. These parrots are smaller and slightly dark and have a maroon tipped tail instead of the Congo’s red one.

Palm Cockatoos can crack Brazil nuts in their bills. 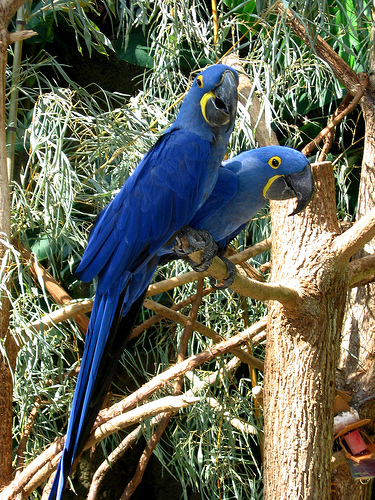 Hyacinth Macaw (above photo) that is native to the forests of central South America is the largest flying parrot species. Easily recognized by its blue plumage, Hyacinth Macaw can have wingspans of 130-150 cm. They species population in the wild is decreasing since many are hunting them for pets.

It is not true that all parrots can learn to talk. Wild parrots do not have the ability to mimic human speech, however, there is one species of parrot is the easiest to teach, the African Grey. 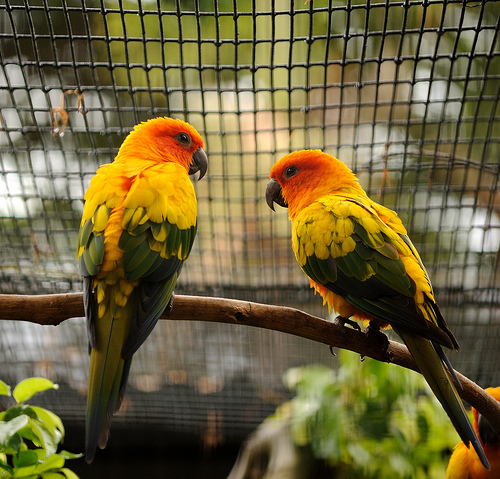 Conures that include nandays, blue-crown and cherry-heads, a popular group of parrots are small cousins of the macaw. They vary in sizes from as small as a parakeet to slightly smaller than an Amazon. Conures are found in Central and South America. One particular species, the Cherry-headed conures, native to Ecuador and Peru, are widespread in San Francisco.

71 species are currently on the ICBP list of endangered species. These include the unique Kakapo and several species of Macaw.

Lories and lorikeets (above photo) have tongues like a toothbrush. It can collect nectar and pollen from flowers with a brushlike tongue that has hundreds of papillae or little bristles. These brightly colored parrots are found from southeastern Asia to Australia and have the brush-tipped tongues.

No parrots are territorial, though they will defend their nests.

The only completely flightless parrot in the world, is the New Zealand native, Kakapo or the Owl Parrot. Why, because it is too heavy where males weigh up to 7.7 pounds with females weighing in at up to 4.4 lbs. It has wings, but no breast bone to anchor the large flight muscles.

Most parrot species are monomorphic, where the male and female have the same coloring. However, one parrot species, the Eclectus Parrots (above photo) are native to the Solomon Islands, New Guinea, northeastern Australia and the Moluccas, are dimorphic. They are unusual in a sense that males and females carry distinct colors. Males are bright green with a light shade near the beak and black lower mandible while females are redheaded with bluish purple breasts and black beaks. To determine the sex of monomorphic parrots, you must get their DNA analyzed.

The feathers on a parrot’s crested head always lay down flat, however the cockatiel and the cockatoo has the ability to raise or lower the feathers on their crest when they want to.

Did you know that all parrots lay only white eggs.

Quaker Parrots, also known as monk parakeets, are the only species of parrots that build a nest with sticks instead of using a hole in a tree. They are found in Argentina and Brazil. Another unique trait of Quaker parrots is that when it comes to feeding the young chicks, Quaker parents are open to receiving assistance from other “helper” birds.

Sulphur-crested Goffins and Moluccan cockatoos (above photo) that are native to Australia and nearby islands are the most easily identified among parrot species. Why, because of their remarkable brilliant white plumage. On the other hand, the palm cockatoo is one of the few black-plumed members of this group.

Pygmy parrots are unique in feeding on slime like fungi and algae.

The Spix’s macaw, known for its light blue plumage have been extinct in the wild, when the last wild male died in October 2000. A native to Brazil, Spix’s Macaw prefer to build its nest on the branches of Tabebuia aurea tree. Because of this restrictive habitat requirement plus the fact that these parrots are popular as pets, they are now on the brink of extinction. However, conservation projects are underway and this species survives now in captivity, mostly in private collections.

Contrary to some belief, both parents work together to hatch the eggs and care for the young.

Amazon parrots (above photo) are among the most popular species to keep as pets. They are very sociable and can mimic human speech.

Parrots are an endangered species because people destroy their habitats and capture them for pets.

Pionus parrotsare known for being more reserved and quieter than other parrot species. However, when they are under stress, they will make a panting sound and give off a musky odor. These parrots endemic to Central and South America, and can easily be distinguished by their dull green plumage with a patch of bright red feathers on their tails.

Most parrots are native to warm tropical forests, but the Kea of New Zealand is the only parrot species that is capable of living in alpine regions.

31 thoughts on “The Lovable Parrots: Surprising and Exceptional Facts”